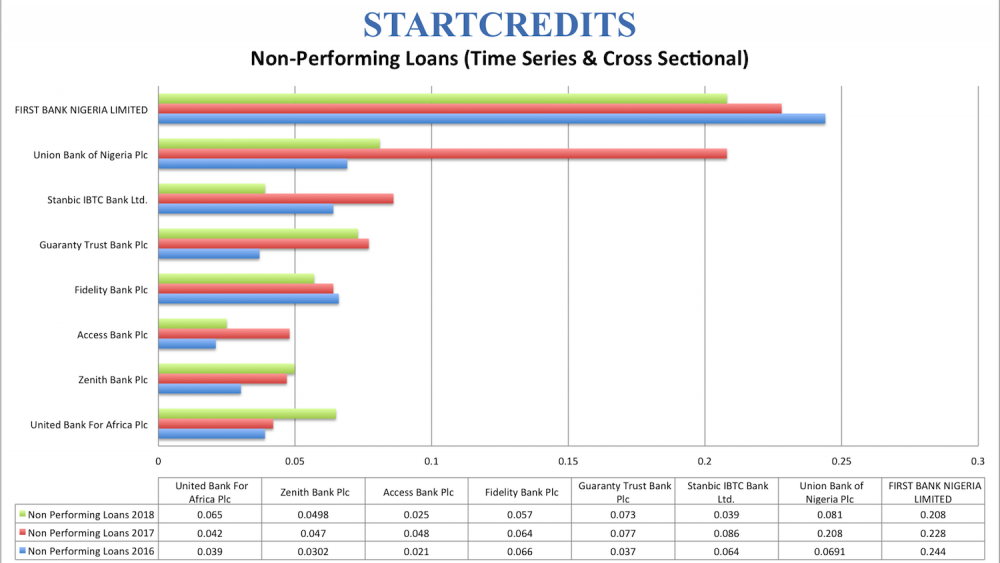 A Non-Performing Loan (NPL) in Nigeria is the sum of money borrowed in a loan contract in which the borrower has not made required repayments agreed to for at least 90 days.

The 2019 Non-performing loans in Nigeria Ranking The Central Bank of Nigeria sets limits for banks and other financial institutions on non-performing loans to reflect in their books.

For the Mortgage Refinance Corporation, it stated, “The maximum ratio of non-performing loans to total gross loans for MRCs shall not at any point in time exceed 10% or such other level as may be prescribed by the CBN from time to time.”

It stated that the MFBs must make provisions for credits such as general provision of two per cent of the outstanding balance of performing facilities or as may be advised by the CBN from time to time.

For DMBs, it stated, “The NPL limit banks are required to manage their credit risk effectively. To this end, all banks are to ensure that the level of NPLs in relation to gross loans does not exceed 5%.”

From the figure above Access Bank is the best performing financial institution with an average non-performing loan ratio of 3.13% during the period analyzed. Whilst First bank of Nigeria is the worst performer on this metric.

A continued increase in the NPL ratio could reduce the banks capital base and potentially cause a risk of loss to depositors in the bank.

A loan is impaired where there is impartial evidence of one or more events in accordance with IFRS that the loan may not be paid. IAS 39 requires interest income from all loans including the impaired to be accrued. In practice, when the repayment of a loan is in doubt, the continuation of interest accrual would be recording interest income that is not likely to be recovered.